Hollywood Tarpania is an appealing mare with a lot of potential for the higher level. At the moment she’s competing on a Prix Saint George level with Marije van Kersbergen .

In 2017 she competed on the world championship for young horses in Ermelo and in 2018 at the finals of the Pavo cup.

Besides the sports Hollywood is also used for breeding. Her first foal the stallion Kingsley Tarpania of Lord Leatherdale is approved by the AES and is doing very well in Australia.

Her second foal is Lakewood Tarpania (Charmeur), this mare is also Elite and placed for the semi finals of the Pavo cup. She’s now also competing for the selection of the WCYH in Verden.

This year is also approved in Oldenburg Germany the stallion Dutch Dream. So Hollywood Tarpania has allready 2 approved stallions in her pedigree. Durch Dream won in 2022 the VSN trofee in the Netherlands and became 3’rd in the final of the PAVOcup 2022..

Hollywood now has more then 10 foals, except for the first two all other foals are born by ET with surrogate mares.

At this moment she’s having a bit of rest. We flushed 2 embryo’s this year and are expecting one in the beginning of march of Fynch Hatton and at the end of march of Kjento. 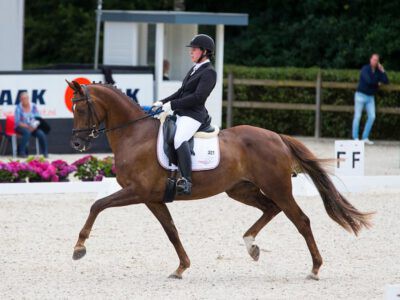